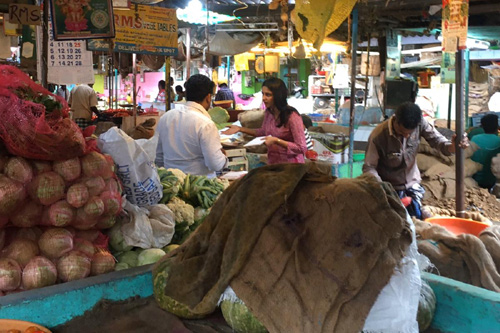 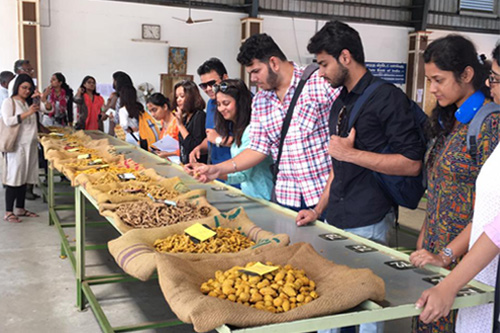 ACJ’s business journalism students stepped out of the classroom for an entire week in December to understand the impact of the Indian economic slowdown on Tamil Nadu’s small towns. They visited Erode, Salem and Namakkal – three important districts in the Kongu Nadu region. The trip gave them a chance to practise good, old-fashioned shoe-leather reporting and understand the challenges of covering a local economy.

Erode is known as the “Turmeric Capital” of India. A visit to one of its turmeric markets in Ondikkarampalayam helped the students wrap their heads around how a live auction works. During the auction, wholesale traders used traditional techniques to assess product quality and a new app to bid for turmeric bulbs and fingers produced by farmers in nearby villages.

Despite getting a GI tag, Erode’s turmeric business is struggling and losing ground to better varieties produced elsewhere in the country, the students found. They also interviewed the vegetable vendors of Nethaji market, the cloth merchants of the district’s largest textile market TexValley and the weavers of Chennimalai or “Handloom Town” to understand how they were coping with falling demand and sliding incomes during the slowdown.

The trip also gave the class a chance to study the longer-term impact of demonetisation and the Goods and Services Tax (GST) on businesses across the region. Rig owners in Tiruchengode, dubbed the borewell hub of India, have seen their annual sales fall 60 percent. Namakkal’s lorry makers’ contribution to the local economy plunged by half to 25 percent in 2019. The handloom weavers of Erode don’t want their children to be in the business due to its dim prospects. Silver anklet makers in Salem expect the business to die in half a decade.

The trip also included visits to the Karungalpalayam cattle market in Erode and a chicken farm in Namakkal, helping the students understand the challenges faced by the livestock and poultry businesses. The class also visited the Ardhanareeswarar temple and the Gandhi ashram in Tiruchengode, which have contributed significantly to improve the lives of the locals.

The students produced a special edition of their in-house magazine “The Bottomline” to showcase the stories they got during the trip, which served as a grim reminder of the fact that the poor hurts the most in any economic slowdown.